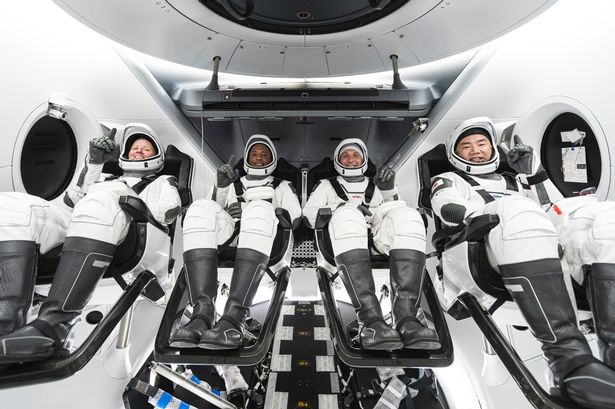 As Prometheus Space has always proclaimed, the only way for space technology to really progress is for the space sector to get involved with space missions and space launches. This is similar to the Aviation Boom that happened in 1930s with the involvement of the airlines in aviation. As more and more space companies get involved in space missions, this will cause the space sector to grow and this will cause more money to flow to the sector which will cause new players to enter the space market. Yesterday the SpaceX launch of 4 astronauts to space was an important feather in the cap for the space sector.

SpaceX was able to create another milestone in the space technology missions of the private sector with its recent launch of 4 astronauts into space. It’s the third crewed launch for SpaceX owned by Elon Musk in less than 12 months.

A slightly sooty Falcon 9 rocket topped with a Crew Dragon capsule took to the skies above NASA’s Kennedy Space Center here at 5:49 a.m. EDT (0949 GMT) today (April 23), lighting up the predawn sky as it lifted off from the historic Pad 39A.. The launch kicked off SpaceX’s Crew-2 mission, which will carry four astronauts — NASA’s Shane Kimbrough and Megan McArthur, French astronaut Thomas Pesquet and Japanese spaceflyer Akihiko Hoshide — on a 24-hour flight to the International Space Station (ISS). The launch countdown proceeded smoothly.

“Our crew is flying astronauts from NASA, ESA and JAXA, which hasn’t happened in over 20 years,” Kimbrough told SpaceX flight controllers just before launch as he thanked the NASA and SpaceX teams. “Off the Earth, for the Earth, Endeavour is ready to go.”

The Falcon 9 put on a breathtaking show this morning as the glows from the rocket’s engines lit up the sky.

Crew-2’s launch was one for the history books. It marked several firsts, including the first time that people have flown on a used Crew Dragon and with a used Falcon 9 first stage, and the first time that two different international astronauts have ridden in the capsule.